The wait is over. Today, after much speculation about both process and substance, the proposed new disclosure rules for civil litigation in England and Wales have been revealed. These reforms to Part 31 of the Civil Procedure Rules (Part 31) have been prepared by a Disclosure Working Group (DWG) set up last year. The DWG is chaired by Lady Justice Gloster.

Speaking at the Commercial Litigation and Arbitration Forum today (at which I was a panellist discussing the impact of tech on dispute resolution), Lady Justice Gloster announced that the proposed new rules will be published today. She acknowledged the perceptions that “the Jackson Reforms simply have not resolved the problem of disclosure ”, and that "maybe judges are not exercising sufficient restraint on parties’ enthusiasm for disclosure ”.

It had been expected that the new rules would undergo a two month formal consultation period, before being put to the Civil Procedure Rules Committee (CPRC) for approval. That will no longer happen. However, in response to concerns raised by Court users about launching a pilot in the absence of any consultation, it was today announced that, prior to CPRC approval, the rules will be subject to a four month feedback period and “roadshows”. There will then be a pilot phase which will involve the new rules being mandatory for all matters heard before the Business and Property Courts of England and Wales for two years.

The proposed new rules differentiate between ‘Basic Disclosure’ and ‘Extended Disclosure’. Basic Disclosure requires parties to serve key documents on which they rely, or which are necessary to enable their opponent to understand the case it has to meet, with each statement of case. Parties can agree to avoid Basic Disclosure, and it is not required in some circumstances eg where it would require disclosure of more than 500 pages.

Extended Disclosure consists of five models that the Court may order, on an issue by issue basis (the parties are required to agree a List of Issues for Disclosure ahead of the first CMC). Not all of the models are really ‘extended’ in terms of the disclosure allowed or required, but the term is used to refer to all five. In summary:

So what else have we learnt today?

What will it take to stop standard disclosure being the norm?

In April 2013, a menu of disclosure options was introduced. From it, the Court could make orders for non-standard disclosure on an issue by issue basis if necessary. In reality, there hasn’t been widespread behavioural change from those seeking disclosure orders. As Mr Justice Popplewell, the judge in charge of the Commercial Court, said this morning, “In practice it is very rare for anyone at a CMC to ask for anything other than standard disclosure ”. Put simply, Commercial Court litigants remain the diners most likely to choose the same thing from the menu each time. A standout exception is Mr Justice Males’ sampling disclosure approach in Bank Mellat v HM Treasury [2017] EWHC 2409 (Comm).

The changes to Part 31 aim to nudge parties away from standard disclosure and to cause the “cultural change ” that Lord Justice Jackson has called for. Parties seeking Extended Disclosure will have to persuade the Court to order disclosure by reference to one of the five models described above. In a sign that some of the more radical ideas that were being touted have not won the day and orthodoxy has prevailed, all forms of disclosure under the new rules force the disclosure of adverse documents at some stage. Some will describe this as an opportunity lost but it recognises that, in the heat of (courtroom) battle, parties are willing to pay for a ‘warts and all’ process if it forces the other side to reveal that which they'd rather hide.

In line with recent trends, the proposed rule changes rely on judicial willingness to be more interventionist – especially when one or more parties seek Extended Disclosure.

The Court will have no choice but to make more detailed decisions about what disclosure to order at the CMC stage, with litigants needing to frontload key strategic choices potentially before they may feel comfortable about doing so. Parties are meant to forget obtaining litigation advantage and to cooperate and agree as much as they can.

Greater judicial reading time will be needed for the judges hearing such CMCs to understand what the right disclosure model is for each issue on which a party seeks Extended Disclosure. How will this extra reading time be found when there are spaces on the bench (Joshua Rozenberg recently called this “a crisis in the judiciary ”) and those sitting on it are already burdened with Herculean workloads? A report published this morning by the House of Lords Constitution Committee concluded that the Committee is “concerned about the working conditions of the judiciary and the detrimental effect they may be having on retaining and recruiting judges. The dilapidated state of some courts coupled with administrative burdens, under-resourcing of staff and IT shortcomings all need to be addressed.”

And it’s not just the judges who will need to have more time to prepare for such CMCs. Lord Justice Jackson has quoted one judge as saying: “When disclosure is an issue during case management it is not uncommon to find that the parties' counsel cannot describe the documents which they expect to be relevant, why they might exist or why they will benefit determination of the issues concerned. This is particularly the case for electronic documents when requests for practical descriptions and examples are usually met with bluster ”. Going forwards bluster won’t pass muster.

As we all know, judges are also increasingly willing to condemn parties for perceived disclosure failings (the high water mark still probably being Mr Justice Hildyard’s criticism of “an unfocused disclosure process, which has fanned out exponentially and extravagantly without sufficient control and direction ” in The RBS Rights Issue Litigation).

New 30 minute “Guidance Hearings” will be available under the new rules. The idea being that intractable disclosure-related disputes can be heard before a judge if the point(s) (supposedly) need no more than 30 minutes reading in time. This is exactly the type of speedy/nimble decision-making that many institutional litigants have been demanding. But, again, from where will the additional judicial time this requires be conjured up?

Part 31 has come under pressure in recent years. Reasons for this include:

• an explosion in big data;

• belt-tightening in legal spend; and

• greater litigation competition from jurisdictions coveting London's crown (and not in the Claire Foy/Olivia Colman sense).

The proposed changes seek to modernise and, to an extent, future-proof Part 31 by updating guidance on dealing with electronic documents. Inevitably, however, tech advances faster than procedural rules about it.

As vivified by the combined (and, with a change of political personnel, more harmonious) efforts of the Lord Chancellor and the senior judiciary, there's no room for complacency if the UK courts are to remain a global litigation destination of choice. The importance of this to UK plc (even absent what Mr Justice Popplewell called today “the shadow of Brexit ”) underpins the proposed Part 31 reforms.

The GC100 (general counsel and company secretaries to FTSE 100 companies) has rightly flagged the costs of litigating in London, particularly given the obligation to search for and disclose documents which adversely affect a party’s case. It's a truism that, in the abstract, disclosure in big ticket litigation is (too) expensive. That said, as noted above, accessing the other side's ‘bad docs’ can be a key factor in why parties choose to litigate in London, over other jurisdictions and other forms of dispute resolution. And it would have been wrong for the commitment to ‘truth finding’ in our litigation process to have been sacrificed on the altar of cost-saving. Indeed, speaking on the same panel today as Lady Justice Gloster, Mr Justice Knowles emphasised “the importance of disclosure in the search for truth ”.

At the moment, there is no evidence as to whether the proposed rule changes will reduce costs in reality whilst maintaining these advantages. It's crucial that the pilot process sets out criteria against which the success or otherwise of the proposed changes can be meaningfully measured.

The DWG expects the two year pilot period to begin in spring 2018. Lady Justice Gloster confirmed today that we are now in a four month period of further feedback and training on the new rules.

There is no one size fits all for litigation disclosure in England and Wales and achieving a successful framework for it is made harder by the number of interested parties, and conflicting views about exactly what disclosure should do. The jury's out on whether the reforms will manage to please most of the litigants most of the time. 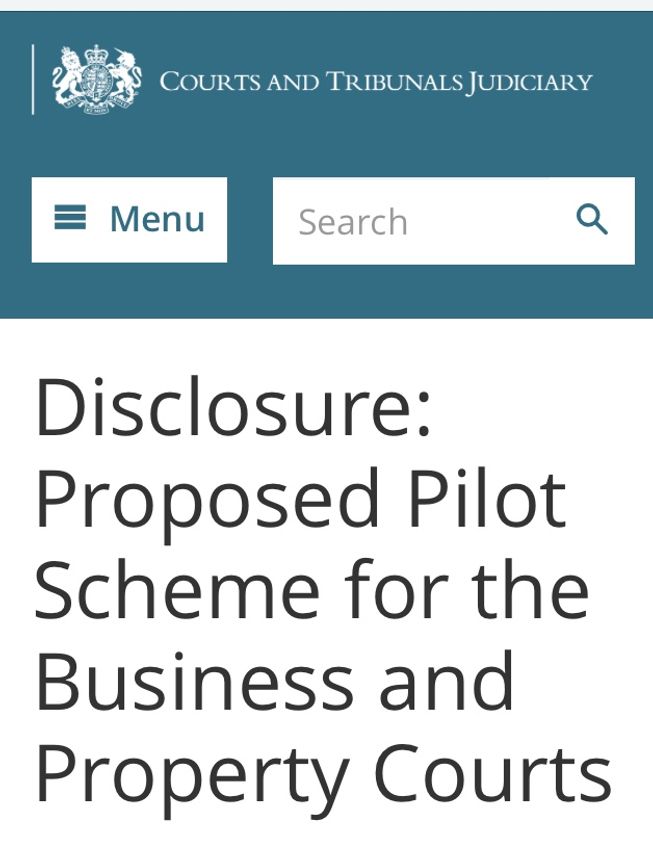