The European Commission has for some time been working on revamping its rules on cooperation between competing businesses (often called “horizontal cooperation”). The new rules will not apply until the start of 2023, but the design process is very much underway. On 13 July the Commission took the next important step, publishing a public consultation (pdf attached) in order to gather stakeholder input on various issues, and also on certain policy options which it sets out.

The rules under review consist of the two block exemption regulations, which provide a safe harbour respectively for certain R&D and specialisation agreements, and the Horizontal Cooperation Guidelines which provide guidance on applying the block exemptions and on assessing the legality of a broad range of types of competitor cooperation.

Why are these rules and their revision important?

These rules govern a wide range of ways in which competing firms may work together, whether through simple agreements or more structured joint ventures (though excluding hard core cartels). This means that they apply to joint arrangements such as those for R&D, production, purchasing, commercialisation, standardisation, and information exchange.

They have recently been particularly in the limelight given political and societal sustainability concerns, and the ambitious environmental targets set by Commission’s “Green Deal”, which competition law is required to play its part in achieving. It is widely acknowledged that some measures which bring environmental and other sustainability benefits require competitor cooperation and so can raise competition law issues. The current Guidelines say little on this, and it is important that the Commission uses this revision to make its position clear, so that legal uncertainty does not chill such desirable cooperation.

Similarly, digitalisation and technological progress have given rise to a lot of new issues, and business needs guidance which better reflects modern technology and digital market environments, and deal with the issues these raise – for example data sharing, data pooling and network sharing agreements, and when and how data may be shared.

The Commission has already gathered much evidence on the functioning of the rules, which it set out in its recent evaluation report. This included the responses to an initial public consultation opened in 2019, and the views provided by national competition enforcers across the EU. It also drew on the responses to the Commission’s 2020 consultation on Competition Policy and the Green Deal, and on an independent report which it commissioned to examine the effectiveness, relevance and efficiency of the current regime.

What does the Commission want to know?

The consultation questionnaire asks many detailed questions, many of which require specific examples of experience with different aspects of the regime. Others ask for input on possible options for change, including the expected impact such change would have.

A number of options for change of the two block exemptions that focus on making them more accessible and useful to SMEs, research institutes and academic bodies are set out. These include the introduction of special exemptions, and the loosening of certain conditions, for such bodies. More generally, the Commission is considering limiting the condition of full access to the results of R&D cooperation, and the condition of giving access to pre-existing know–how, so as to make the R&D block exemption more useful. As for specialisation, the definition of unilateral specialisation could be expanded, and horizontal subcontracting agreements with a view to expanding production might added into the exemption.

As for the Guidelines, most of the questions concern the following topics:

The deadline for making submissions in the current consultation is 5 October. Then at the beginning of 2022 there will be a further public consultation on the proposed revised texts of the Guidelines and Regulations, after which they will be finalised so as to enter into force at the start of 2023. 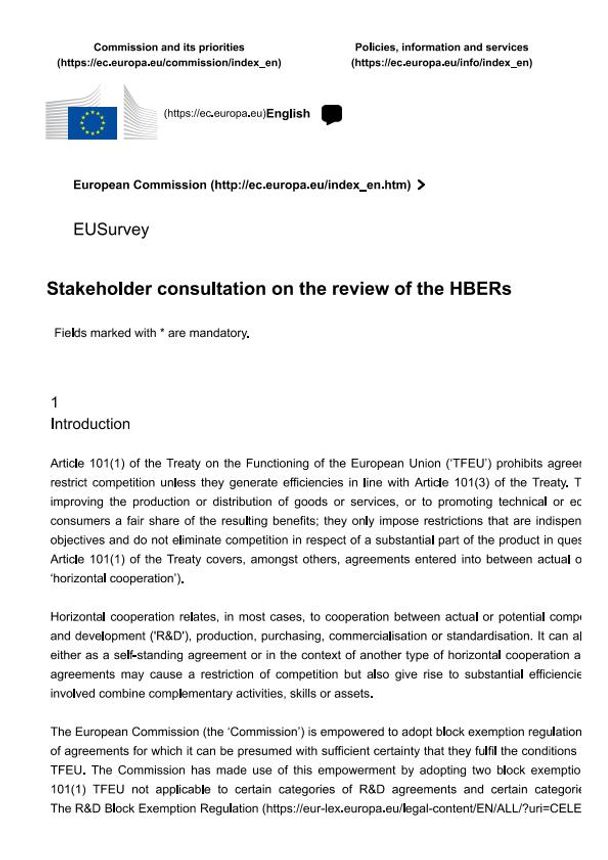